The Emperor's new clothes : an all-star retelling of the classic fairy tale. 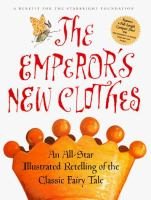 Search for related items by subject

Hans Christian Andersen, one of the best known figures in literature, is best know for combining traditional folk tales with his own great imagination to produce fairy tales known to most children today. The Danish writer was born in the slums of Odense. Although he was raised in poverty, he eventually attended Copenhagen University. Although Andersen wrote poems, plays and books, he is best known for his Fairy Tales and Other Stories, written between 1835 and 1872. This work includes such famous tales as The Emperor's New Clothes, Little Ugly Duckling, The Tinderbox, Little Claus and Big Claus, Princess and the Pea, The Snow Queen, The Little Mermaid, The Nightingale, The Story of a Mother and The Swineherd. Andersen's greatest work is still influential today, helping mold some of the works of writers ranging from Charles Dickens to Oscar Wilde and inspiring many of the works of Disney and other motion pictures. Andersen, who traveled greatly during his life, died in his home in Rolighed on August 4, 1875. (Bowker Author Biography)